The Kingdom of David reigns, in the hearts and minds of its subjects across the world and universe. The 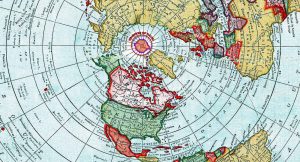 Kingdom of David, lays claim and controls by proxy, inaccessible lands at the Center, Middle and Interior of the Earth, above the +88th N. Parallel.

The site of the Garden of Eden which is still intact is located beyond the North Pole in the middle of the Earth and is protected by supernatural forces subject to Yah and loyal to the Kingdom of David.

These lands and rivers are also described in more detail in the apocryphal books discovered in the Nag Hammadi library and recorded by Mercader in his 1569 northern projection map.

Whereas no nation, peoples, race, nor sovereign has ever laid claim to the lands beyond the North Pole above the 88th Parallel, hereafter referred to as “Middle Earth”.

Whereas said lands, “Middle Earth is described in the Bible Book of Genesis. kingdom or any authority of man

The promise by the Creator to King David is understood to be the whole earth by the big three religious camps.

Promises of Yah to King David A Covenant with Death